Finally receiving the divorce decree is an accomplishment for divorcing parties, however, it does not always mean the end of the matter. If custody and support were issues were raised as part of the divorce, even though an initial resolution may have been met, both are issues which can be revisited based on change of circumstances. Additionally, in either a court order on equitable distribution or a settlement agreement reached between the parties, there may be provisions which carry additional obligations to be fulfilled even after the divorce has concluded. Support and custody issues always carry a continuing obligation to either pay a certain amount per month or follow a certain custody schedule. There are also several scenarios when dealing with marital property that can create a continuing obligation.

For example, when a marital residence is being kept by one party, there will likely be a provision granting the party a certain number of days to refinance the property and buy the other party out for their share of the equity. If the refinance does occur, a deed will probably be needed to place the title into only one party’s name if not already done. If the refinance does not occur in that time frame, the alternative is usually to put the house up for sale and split the proceeds. If the parties cannot agree about selling the house, selecting a realtor, setting a price, etc., either party may seek assistance from the court. This would involve a Petition for Contempt and Enforcement of the court order or agreement. Most well-drafted agreements will include a provision that the party defaulting on their obligations will be the party responsible for any additional legal costs incurred to enforce the agreement.

Click here to read more on life after divorce. 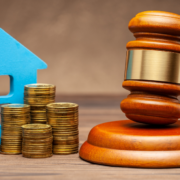 How an Inheritance could hurt you in a divorce

Are You Having a Post-Divorce Housing Nightmare?

No jury trials for custody or divorce cases

What happens to the ring when the wedding is called off

Divorced and Taking Your Children Out of the Country – PA Law