Gone are the days when prenuptial agreements are viewed as contracts on a marriage or a guarantee on divorce. While some religions and cultures still do frown upon them, they can be a great way to talk about finances and strengthen your marriage with clear expectations. If you have children from a previous relationship and significant assets to protect, a prenup can also make everyone feel more comfortable.

What is a prenup? A prenuptial agreement, also known as an antenuptial agreement here in PA is a formal agreement entered into before marriage in which the future spouses agree to provisions for equitable distribution of assets, debts and spousal support in case they divorce in the future or if they wish to provide for what happens to assets in the event of death by waiving a spousal election which is provided for in each state under the state law. In this document you can discuss current financial positions and how finances are going to be handled during the marriage, and whether you wish your will to control in the event of death.

The general purpose is for future spouses to think about and decide, prior to a marriage, their rights and duties concerning financial issues. These agreements can be especially helpful because putting one together forces the parties to discuss financial issues, a topic many of us avoid and is a common reason for divorces. If one or both parties have a substantial income, assets or debts these agreements may be a good option.

If one of you has significant assets or had to pay handsomely in a previous divorce, a prenuptial agreement can put one’s mind at ease that the less well-off party is not marrying for money.

In case a divorce does happen and if the agreement is valid, the issues agreed to in the contract are settled. Whatever issues not included in the agreement need to be worked out or failing that, litigated.

· The agreement is in writing,

· Signed by both spouses, and notarized.

· Accompanied by a statement of assets for both parties and includes an estimated net worth as well as previous tax and salary information.

· The agreement cannot be the result of fraud or duress. It is a good idea to complete the prenuptial agreement and signing far before the wedding to rule out the appearance that it was forced on one party by the other.

· The parties understood and accepted the terms and conditions of the agreement, agreed to it voluntarily and had enough time to think about it prior to signing it. This includes the opportunity for both parties to consult with their own attorneys and make changes to or discuss points in the document.

· The agreement is fair and not “unconscionable,” which it may be even if what one spouse receives is small or disproportionate compared to what the other spouse receives, as long as one spouse is not left destitute.

Prenuptial agreements, like any contract, can be changed with the agreement by both parties.

A valid prenuptial agreement should shorten if not prevent disputes over financial issues if a marriage ends or a spouse dies, but issues they don’t cover are child custody and child support which can be especially contentious depending on the parties. If they can’t reach an agreement these issues would be decided in court, which can be a long, expensive and emotionally painful process.

Whether or not you signed a prenuptial agreement and your marriage is heading for a divorce, contact our office so we can talk about how mediation could bring an end to the disputes between you and your spouse, allowing you to start a new chapter in your life without the emotional and financial trauma that a divorce can inflict. 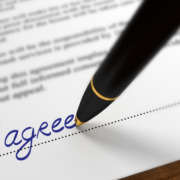 Why do I need a prenup for a remarriage?

How Do I Use a Prenup If I Divorce?

How to Approach the Subject of a Prenup